She did give up revenge, for about five minutes until she saw the carnage. Just like the Hound gave up violence for an episode, until everyone got a case of the carnage

There’s a theory that Dany didn’t do it. Bran did.

Okay, There’s Even More Proof That Bran Is Fully Evil on ‘Game of Thrones’

I read that Bran theory but what would Bran have to gain from it? Like he told Jaime himself in the Godswood, “I’m not mad ay anyone anymore.”

Besides, when my wife says “I’m not mad anymore”, that’s when I have to watch my step.

I just read this and yeah, this makes perfect sense why she wrecked shit up, from The Atlantic:

To viewers, Daenerys’s decision to obliterate the Westerosi capital of King’s Landing, a seaside city of 1 million people, would seem to transform her into “the Mad Queen.” After her army’s successful breaching of the city walls with the help of her dragon, the defending Lannister forces surrendered. Yet Khaleesi continued raining fire on men, women, and children indiscriminately. These are cruel acts, and they may have a purpose: Lords who would otherwise be unlikely to support a foreign invader, especially when news has spread of Jon Snow’s hereditary claim to the Iron Throne, must now fear that if they resist Dany, they’ll end up as ashes, too. 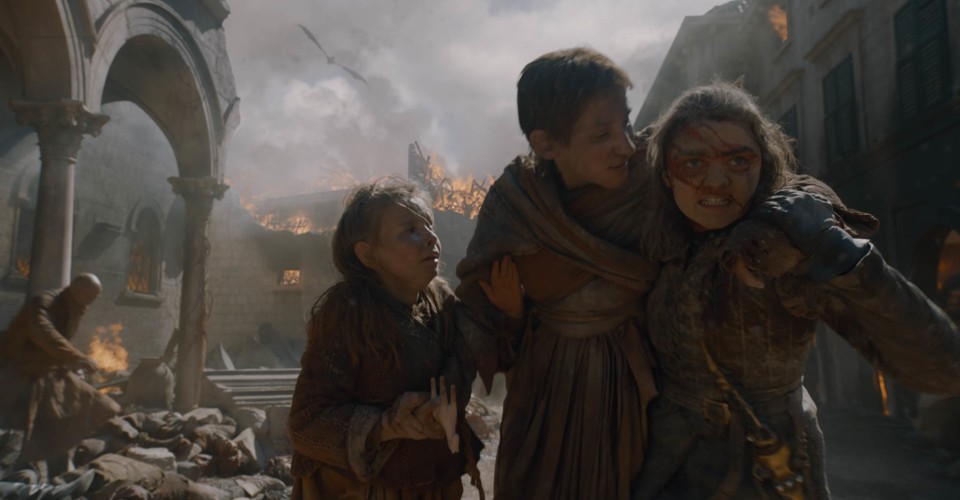 Why Did Dany Destroy King’s Landing? Some Theories From History

A scholar of classical warfare sees real-world parallels to the Dragon Queen’s rain of fire in the penultimate episode of 'Game of Thrones.'

Let it be fear, then.

I actually wondered if the show may somehow ever send one of their stars to watch with fans in a big watch party setting. The Burlington Bar outside Chicago seems to be the most involved fanbase (Sometimes it sounds like a football game in there, Go Bears). Someone who’d been on the show showed up this past week, recognize anyone?

To the left, Young Hodor if you didn’t catch it.

Give me more Mad Queen Daenerys. In fact, inject that fire-breathing-badassery directly into my veins because it was super awesome. Screw the people of King’s Landing. These were the same reprobates that cheered for Ned Stark’s beheading, ripped a Septon limb-from-limb and almost raped Sansa, turned on Tyrion even though he was the one who saved all their unwashed asses from Stannis, flocked to the call of a religious zealot with a god complex, and threw rotten fruit and literal shit at Yara Greyjoy and the remaining Sand Snakes as Euron Greyjoy dragged them through the streets with collars chained around their necks.

The populace of King’s Landing was the worst and it needed to be scoured from the Earth. #DanyDidNothingWrong

These are the books and show of the Red Wedding, Ned Stark’s beheading, murder, backstabbing, RAT BUCKET, and people thought Dany was going to graciously take her fairly won throne and rule compassionately.

If you think this has a happy ending, you haven’t been paying attention.
~Ramsey (Snow) Bolton Yup. And props to Emilia Clarke for her very very 1938 Hitler-esque speech, it was chilling

Agreed. 'Twas my first thought when I saw it, and I agree with WK’s take on the speech also.

Edmure Tully, Lord of Sit Down Forget the coffee cup, how about TWO bottles of water?

I missed them both… too busy critiquing the tent framing.